The FHA is losing money faster than the insurance premiums are coming in. A bailout is on the way.

You know that it's moving too fast

Your out of bounds

To sound the alarm in your head

And turn this thing around

We can't go back

Everyone is familiar with the billions we are spending to bail out the GSEs, but little is known about similar problems at the FHA. So far through a hefty increase in FHA insurance and a large dose of head-in-the-sand accounting, the troubles at the FHA have been largely obscured from view.

Despite the good job bureaucrats have done at hiding the problem, the FHA is facing major losses on its loan portfolio which has been expanding rapidly as the housing bubble began to deflate in 2007.

Concerns are rising that the Federal Housing Administration could run out money if the economy doesn't recover soon, raising the risk the agency would seek a taxpayer bailout for the first time in its 77-year history.

Since the mortgage crisis erupted five years ago, the FHA has played a critical role in housing finance as private lenders retreated. It backs about a third of all new mortgages originated for home purchases, up from around 5% in 2006.

But, as the FHA prepares to release its annual financial report next week, a forthcoming study by Joseph Gyourko [see embedded document below], a real estate and finance professor at the University of Pennsylvania's Wharton School, estimates that the FHA faces around $50 billion in losses in the coming years. 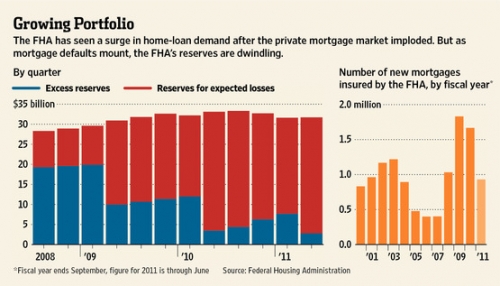 The study says only a “quick and substantial economic and housing market recovery” can avoid “substantial losses for American taxpayers.” The paper was commissioned by the American Enterprise Institute, a conservative think tank.

Since we know a “quick and substantial economic and housing market recovery” is not forthcoming, it's safe to assume the American taxpayer will see substantial losses on the FHA portfolio.

The study says the losses will be spread over a period of many years and are unlikely to bankrupt the agency this year or next.

The study isn't the first to predict the FHA's insolvency. Last year, economists from New York University and the New York Federal Reserve issued a paper warning of the growing likelihood the agency would need to a taxpayer bailout. FHA officials disputed some of that report's findings.

Last month, Paul Miller, an analyst with FBR Capital Markets, warned that the largest U.S. banks could face billions in losses if the FHA tries to push back defaulted mortgages onto the lenders that originated them. “Unless home prices rebound, I don't understand how they're able to avoid a restructuring and a Treasury infusion,” he said.

FHA officials said they couldn't comment on Mr. Gyourko's paper because they hadn't reviewed it. The FHA's independent audit is likely to show that while losses are rising, it will maintain positive reserves assuming the economy doesn't dip back into recession, say people familiar with the matter.

Still, the Gyourko study along with the FHA's own annual report could have political ramifications. Some Republicans have pushed for the FHA to begin raising its down payments. Higher forecasted losses could also force the agency to raise its insurance premiums paid by homeowners even higher.

Despite the fact that the FHA should raise its downpayment requirement and its insurance premium, neither one is going to happen because the effect it would have on the housing market would be too politically unpopular. We are already having difficulty finding wam bodies with jobs to clean up the foreclosure mess. If we make the qualified buyer pool even smaller, the market bottom and ultimate recovery would be even further off into the future.

The FHA has long served first-time buyers and borrowers with modest incomes. Its market share collapsed during the housing boom because it didn't abandon underwriting standards.

The one and only thing the government did right during the housing bubble was to leave the FHA standards alone. Since the FHA is a true government agency and not a quasi-governmental body like the GSEs, it has no pressure to loosen its standards to maintain market share during the bubble.

U.S. home prices inched 0.2% higher in August, according to a closely watched index released Tuesday. That prompted one economist to see a “modest glimmer of hope” for the downtrodden housing market. Mitra Kalita has details on The News Hub.

A lot of that business returned after the private mortgage market's implosion in 2007 and sharp tightening by Fannie Mae and Freddie Mac in 2008.

The FHA, which is funded through the mortgage-insurance premiums it collects, doesn't make loans but instead insures lenders against defaults. At the end of August, it guaranteed 7.2 million mortgages worth $1 trillion, a record sum. It held nearly $31.7 billion in reserve at the end of June, of which all but $2.8 billion was set aside to cover anticipated losses.

The bulk of the FHA's anticipated losses stem from loans made in 2007 and 2008, when the financial crisis was at its peak. More recent loans have among the best credit characteristics the agency has guaranteed.

Still, the majority of homeowners taking out FHA-backed mortgages have very little equity—the minimum down payment is 3.5%.

In reality, these borrowers have no equity. If the transaction costs between closing costs and commissions is about 8%, they are 5% underwater the day they close on the loan.

WSJ Heard on the Street columnist David Reilly stops on Mean Street to discuss the merits of the government's plan to help some refinancing homeowners.

Because home prices have fallen sharply and continue to decline in many markets, many borrowers are underwater and at risk of default if they lose their jobs or experience other financial shocks. Losses also can occur when borrowers simply walk away from their homes.

“I don't think many of the borrowers truly understand what a risky position they're putting themselves in,” said Mr. Gyourko. He estimated that more than half of all homes with FHA loans are worth less than the outstanding debt.

To assume only half the the FHA portfolio is underwater is wishful thinking. These people were underwater from the day they bought, and prices have been going down steadily for the last five years. The real number of effectively underwater FHA loan owners is well over 90% from this era. Based on the dramatic expansion of the portfolio since 2007, it's more likely the percentage underwater on the total FHA portfolio is 75% or more.

If the FHA's reserve account were to run out of money, the agency has what is known as indefinite budget authority to draw on funds from the Treasury Department without a congressional appropriation.

In other words, the FHA has a blank check.

FHA officials have taken steps to shore up the agency's finances, including twice raising the insurance premiums that borrowers must pay in the past year. Last year, the agency raised down payment requirements to 10% for borrowers with credit scores below 580.

David Stevens, who served as the agency's commissioner for two years until he became chief executive of the Mortgage Bankers Association in April, said the Obama administration had moved aggressively to shore up reserves without undermining housing markets.

“The FHA has faced a precarious financial position since the day the administration took office,” he said. “Is it at risk? Yes. Is it better off than virtually any other portfolio based on its ability to have reserved appropriately? Yes.“

It may be better off than any other portfolio, but that isn't saying much. The GSE portfolio is a disaster, and the private-label MBS pools from the bubble are not performing well either to say the least.

It's been pretty well documented that buyers paid $30,000 to $40,000 more to obtain the $8,000 FHA tax credit. Everyone who bought the bear rally is substantially underwater.

The study could also reignite debate over the government's role in stabilizing the housing market. Congress is now considering a proposal to restore higher FHA loan limits.

“Without the FHA, the housing market would not be in a recession, it would be in a depression,” said Kenneth Rosen, chairman of the Fisher Center for Real Estate Research at the University of California at Berkeley. The most certain way to increase losses for Fannie, Freddie and the FHA would be “by making loans harder to get.“

Mr. Gyourko says he isn't advocating an “immediate withdrawal” by the FHA, which he said could create a “real risk” of future price declines.

But he said a gradual withdrawal is warranted and that policy makers “should all be clear about whether we understand the risks we're taking on, and whether the benefits justify the risks.”

Write to Nick Timiraos at nick.timiraos@wsj.com

Unfortunately, Kenneth Rosen is right: without the FHA, the housing market would crash even harder, and the losses to the GSEs and the FHA itself would be even larger. However, Mr Gyourko is right too: the benefits must be worth the risks taxpayers are taking on. Right now, these risks are far too high. Taxpayers are writing a blank check through the FHA to stabilize the housing market. We aren't accurately evaluating this cost today, and the losses are mounting.

Realistically, we won't do anything differently until the market puts in a durable natural bottom. At that point, we may raise the FHA minimum down payment and insurance premiums. realtors and mortgage brokers will whine about “killing the recovery,” but it's essential to protect the American taxpayer — to protect you.

The property went into foreclosure on 8/30/2011, and the bank paid $439,245 which was the outstanding balance on the loan. If they get their asking price, the bank won't lose much on this one; the former owners, however, have lost everything.

Sometimes, that's the way it works out.

25 thoughts on “FHA will be the next taxpayer bailout”