A federal inquiry has blamed Greenspan and Bernanke for failing to regulate dangerous financial products that caused a housing bubble and widespread financial meltdown.

Everybody plays the fool sometime

There's no exception to the rule

Listen, baby, it may be factual, may be cruel

I ain't lyin', everybody plays the fool

The Main Ingredient — Everybody Plays the Fool

Nobody is perfect. Everybody plays the fool sometimes. We hope we put people in positions of power who know what they are doing. Sometimes, these people fail, and when they do millions suffer for their arrogance and their ignorance. The sad conclusion of the government commission on the financial crisis concluded the entire ordeal was avoidable. If a few key people in power had made different decisions, we could have averted a housing bubble and the near meltdown of our financial system. 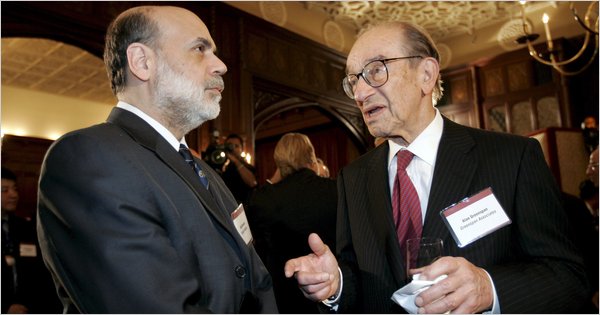 WASHINGTON — The 2008 financial crisis was an “avoidable” disaster caused by widespread failures in government regulation, corporate mismanagement and heedless risk-taking by Wall Street, according to the conclusions of a federal inquiry.

The commission that investigated the crisis casts a wide net of blame, faulting two administrations, the Federal Reserve and other regulators for permitting a calamitous concoction: shoddy mortgage lending, the excessive packaging and sale of loans to investors and risky bets on securities backed by the loans.

“The greatest tragedy would be to accept the refrain that no one could have seen this coming and thus nothing could have been done,” the panel wrote in the report’s conclusions, which were read by The New York Times. “If we accept this notion, it will happen again.”

While the panel, the Financial Crisis Inquiry Commission, accuses several financial institutions of greed, ineptitude or both, some of its gravest conclusions concern government failings, with embarrassing implications for both parties. But the panel was itself divided along partisan lines, which could blunt the impact of its findings.

Many of the conclusions have been widely described, but the synthesis of interviews, documents and testimony, along with its government imprimatur, give the report — to be released on Thursday as a 576-page book — a conclusive sweep and authority.

What is shocking to me is that this report got so much right. Government reports are usually whitewashes of their own ineptitude. This report points out the failings accurately which is rare by government standards.

The commission held 19 days of hearings and interviews with more than 700 witnesses; it has pledged to release a trove of transcripts and other raw material online.

Of the 10 commission members, the six appointed by Democrats endorsed the final report. Three Republican members have prepared a dissent focusing on a narrower set of causes; a fourth Republican, Peter J. Wallison, has his own dissent, calling policies to promote homeownership the major culprit. The panel was hobbled repeatedly by internal divisions and staff turnover.

The majority report finds fault with two Fed chairmen: Alan Greenspan, who led the central bank as the housing bubble expanded, and his successor, Ben S. Bernanke, who did not foresee the crisis but played a crucial role in the response. It criticizes Mr. Greenspan for advocating deregulation and cites a “pivotal failure to stem the flow of toxic mortgages” under his leadership as a “prime example” of negligence.

It also criticizes the Bush administration’s “inconsistent response” to the crisis — allowing Lehman Brothers to collapse in September 2008 after earlier bailing out another bank, Bear Stearns, with Fed help — as having “added to the uncertainty and panic in the financial markets.”

Like Mr. Bernanke, Mr. Bush’s Treasury secretary, Henry M. Paulson Jr., predicted in 2007 — wrongly, it turned out — that the subprime collapse would be contained, the report notes.

Democrats also come under fire. The decision in 2000 to shield the exotic financial instruments known as over-the-counter derivatives from regulation, made during the last year of President Bill Clinton’s term, is called “a key turning point in the march toward the financial crisis.”

That was an Alan Greenspan decision. As head bank regulator, he had the authority to regulate credit default swaps as insurance or allow them to exist in a wild west environment of zero regulation. He chose to allow insurers and hedge funds to concentrate risk to the point that it destabilized the world economy. 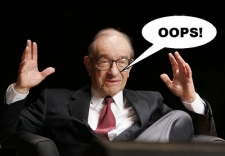 Timothy F. Geithner, who was president of the Federal Reserve Bank of New York during the crisis and is now the Treasury secretary, was not unscathed; the report finds that the New York Fed missed signs of trouble at Citigroup and Lehman, though it did not have the main responsibility for overseeing them.

Former and current officials named in the report, as well as financial institutions, declined Tuesday to comment before the report was released.

The report could reignite debate over the influence of Wall Street; it says regulators “lacked the political will” to scrutinize and hold accountable the institutions they were supposed to oversee. The financial industry spent $2.7 billion on lobbying from 1999 to 2008, while individuals and committees affiliated with it made more than $1 billion in campaign contributions.

The report does knock down — at least partly — several early theories for the financial crisis. It says the low interest rates brought about by the Fed after the 2001 recession; Fannie Mae and Freddie Mac, the mortgage finance giants; and the “aggressive homeownership goals” set by the government as part of a “philosophy of opportunity” were not major culprits.

Amazing. The report is correct on all counts. Each of the items listed above has been erroneously identified as being causes of the housing bubble, mostly by political operatives posturing for advantage.

On the other hand, the report is harsh on regulators. It finds that the Securities and Exchange Commission failed to require big banks to hold more capital to cushion potential losses and halt risky practices, and that the Fed “neglected its mission.”

Right on. The federal reserve abdicated its responsibility to the collective wisdom of the market. The infallible genius of the herd took prices over the cliff.

It says the Office of the Comptroller of the Currency, which regulates some banks, and the Office of Thrift Supervision, which oversees savings and loans, blocked states from curbing abuses because they were “caught up in turf wars.”

“The crisis was the result of human action and inaction, not of Mother Nature or computer models gone haywire,” the report states. “The captains of finance and the public stewards of our financial system ignored warnings and failed to question, understand and manage evolving risks within a system essential to the well-being of the American public. Theirs was a big miss, not a stumble.”

I know I beat up on Alan Greenspan quite a bit, but let's take a look at the questions he asked and the answers he accepted during the housing bubble, and I think you will see why I hold him in such low regard. 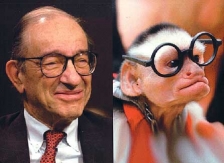 First, it was brought to Greenspan's attention on many occasions that the price-to-income ratio, the price-to-rent ratio, and the aggregate debt-to-income ratio was well outside of historic norms. He surmised this was because the strong economy he engineered was creating many households, and the innovations in the mortgage industry were getting people into homes and boosting the owner-occupancy rate. In short, he was a genius for allowing these other financial geniuses to create such prosperity… or so he thought.

What Greenspan did not do was ask a few simple questions. (1) How can people finance so much money with such a small income? (2) Can borrowers fulfill the terms of these new loans and sustain ownership? (3) What happens if the new innovations in finance fail?

With a little intellectual curiosity from the perspective of new buyers, I believe that any reasonable person could have figured out that prices were built on an unstable base of toxic financing. I am shocked that the head banking regulator, a man with years of education and training and the research budget of the federal reserve behind him, this man could not see the housing bubble. He needs to check his glasses.

The report’s implications may be felt more in the political realm than in public policy. The Dodd-Frank law overhauling the regulation of Wall Street, signed in July, took as its premise the same regulatory deficiencies cited by the commission. But the report is sure to be a factor in the debate over the future of Fannie and Freddie, which have been run by the government since 2008.

Though the report documents questionable practices by mortgage lenders and careless betting by banks, one striking finding is its portrayal of incompetence.

It quotes Citigroup executives conceding that they paid little attention to mortgage-related risks. Executives at the American International Group were found to have been blind to its $79 billion exposure to credit-default swaps, a kind of insurance that was sold to investors seeking protection against a drop in the value of securities backed by home loans. At Merrill Lynch, managers were surprised when seemingly secure mortgage investments suddenly suffered huge losses.

By one measure, for about every $40 in assets, the nation’s five largest investment banks had only $1 in capital to cover losses, meaning that a 3 percent drop in asset values could have wiped out the firm. The banks hid their excessive leverage using derivatives, off-balance-sheet entities and other devices, the report found. The speculative binge was abetted by a giant “shadow banking system” in which the banks relied heavily on short-term debt.

“When the housing and mortgage markets cratered, the lack of transparency, the extraordinary debt loads, the short-term loans and the risky assets all came home to roost,” the report found. “What resulted was panic. We had reaped what we had sown.”

The report, which was heavily shaped by the commission’s chairman, Phil Angelides, is dotted with literary flourishes. It calls credit-rating agencies “cogs in the wheel of financial destruction.” Paraphrasing Shakespeare’s “Julius Caesar,” it states, “The fault lies not in the stars, but in us.”

Of the banks that bought, created, packaged and sold trillions of dollars in mortgage-related securities, it says: “Like Icarus, they never feared flying ever closer to the sun.”

Phil Angelides failed in his bid for governor of California. It looks like he did a great job writing this report for the government commission.

Greenspan and Bernanke were incompetent. A massive housing bubble grow under their watch, and they did nothing. Perhaps our understanding of financial viruses is still primitive, and Greenspan will be pardoned by history for his ignorance. He apologized for his mistaken philosophical beliefs that guided him for 40 years inexorably to the abyss.

Alan Greenspan will be the fool who exposed the folly of the efficient market once and for all. Or will he be the scapegoat for central planning and market manipulation by the federal reserve? Whatever becomes of his legacy, you can now add responsibility for the housing bubble and financial meltdown of 2008.

She more than tripled her mortgage

As an example of how lenders at all levels abdicated their responsibilities, the owner of today's featured property was allowed to more than triple her mortgage debt over a nine year period. Doesn't a lender see that a borrower has gone Ponzi? Did anyone care?

This woman was given this money because of a few key decisions Alan Greenspan made regarding the regulation of credit default swaps which led to a mispricing of risk and a flood of money rushing into the mortgage market.

Status:: ActiveThis listing is for sale and the sellers are accepting offers.

42 thoughts on “Panel finds Greenspan and Bernanke responsible and negligent”