Click here for an overview of Cambria at Stonegate, related documents, and a review of Residence One 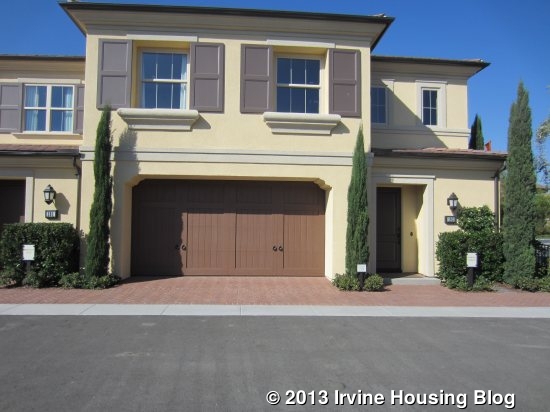 This model is also quite similar to the other two, but does vary a bit more. The entry is more open, with a little nook tucked in by the stairs. It has a big closet with low-ceilinged storage at the back. The powder room is arranged with the sink and toilet side by side, rather than opposite each other on either side of the door. It feels much bigger this way than in the other two homes. 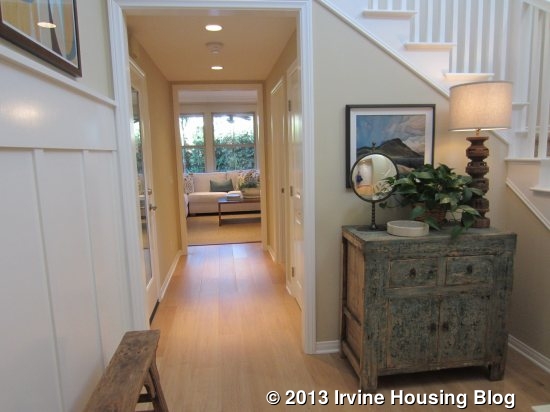 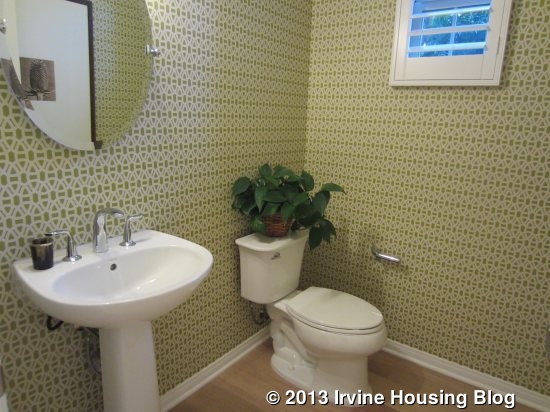 The hall opens to the great room which, like the others, has a wall of windows at the back and a small window on one side. It is shown without any upgrades. In the standard model three, the great room is on the right and kitchen on the left, which is the opposite of the other two residences. 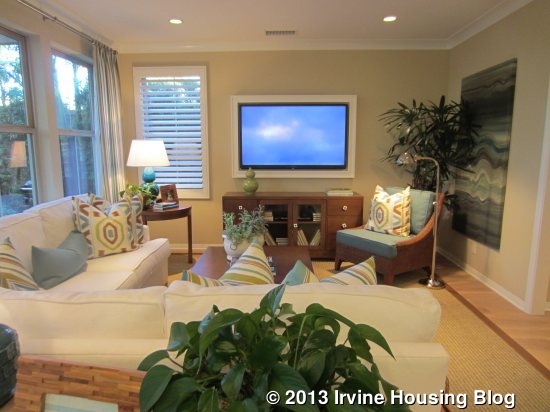 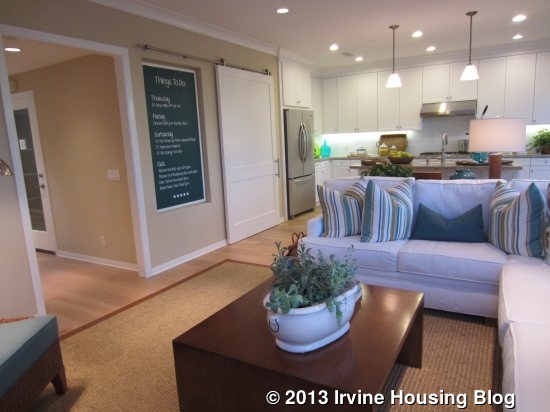 Again, the kitchen is almost identical. Like Residence One, the counters and cabinets extend all the way to the back wall. They upgraded to show glass doors over the counters in the dining area. It shows an upgraded Kitchenaid appliance package, including a 36” cooktop over a separate oven, rather than the standard 30” slide-in range. The dining area is the same, with walls at the back and a door to the back patio. The biggest difference in Residence Three is that it has an option for a real pantry (though the microwave would be inside it). The model shows this option and includes the barn-style door enclosure. 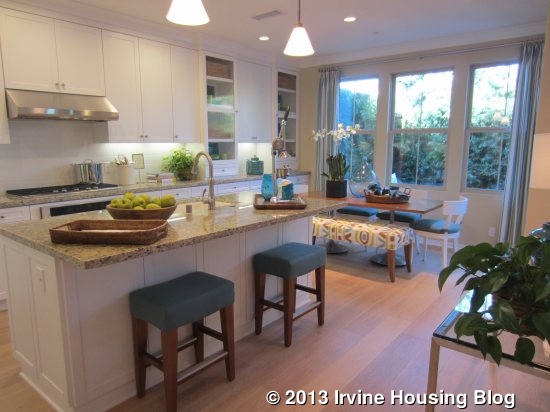 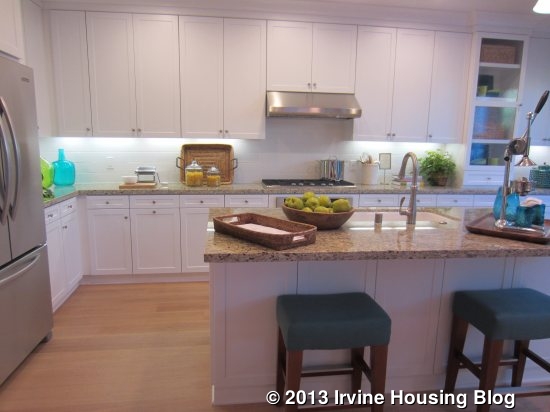 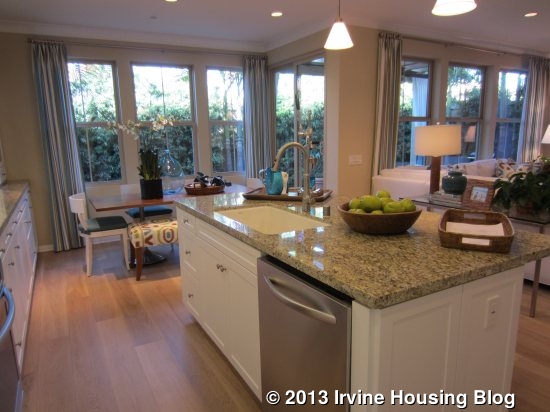 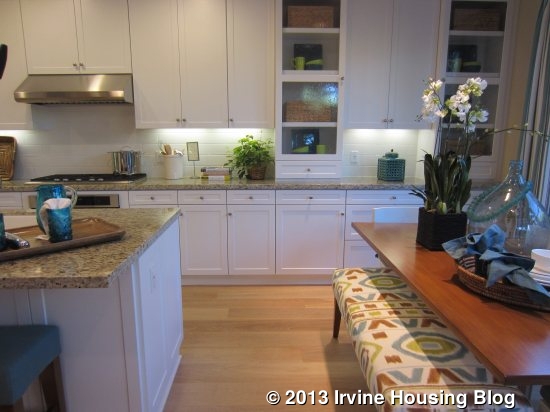 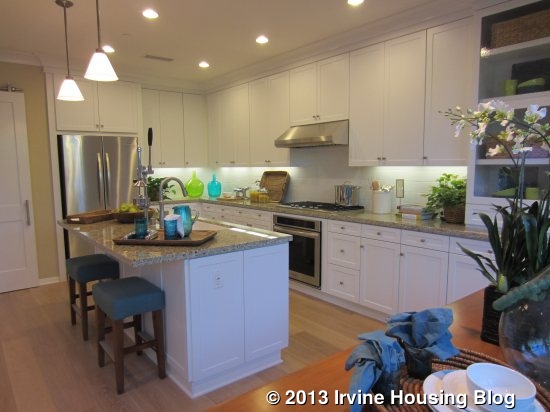 The only difference in the back patio is that the bigger and smaller sides are reversed. 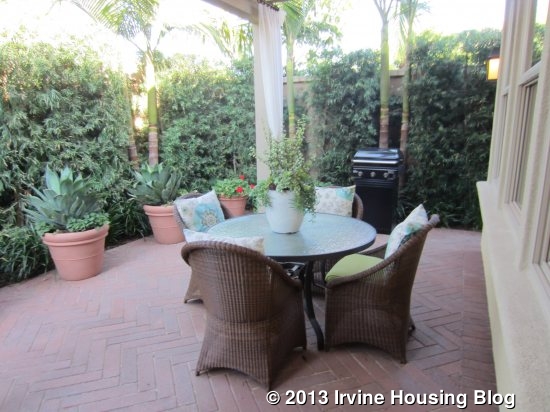 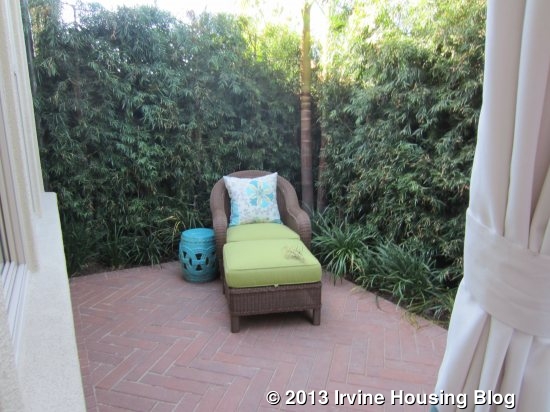 Upstairs, this model is set up very much like Residence One. There are two secondary bedrooms without an option for a loft. Both rooms have standard closets and this model shows the optional storage above them, with cabinets in one and an open space in the other. The rooms are the exact same size, each with a window facing the street, but are mirror images of each other. 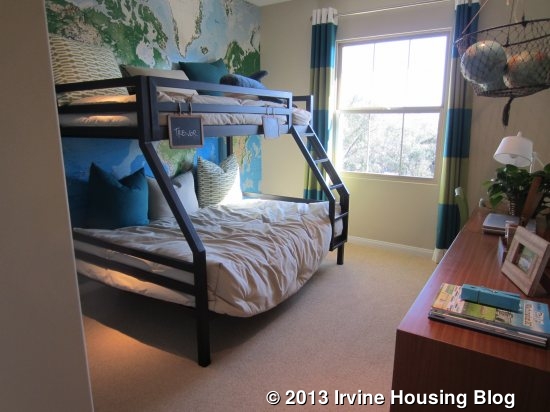 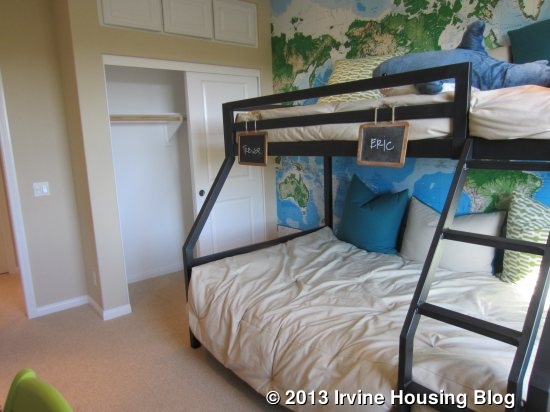 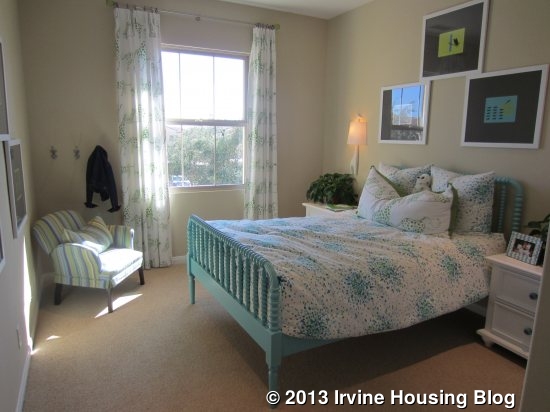 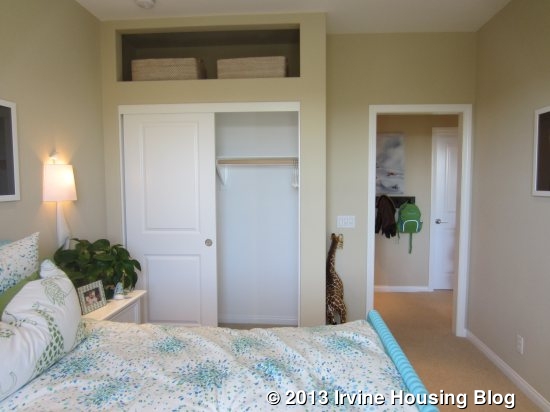 Their shared bathroom (not attached) has two sinks and a shower/tub combo with an option for just a shower. 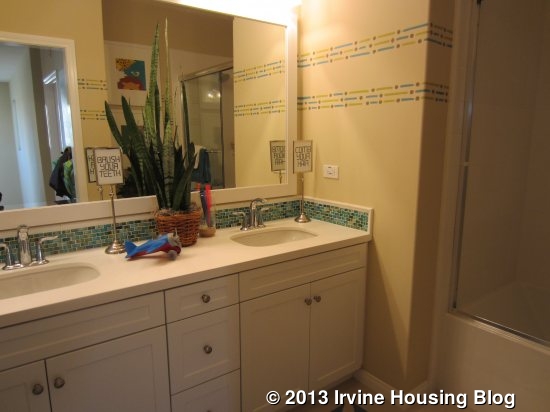 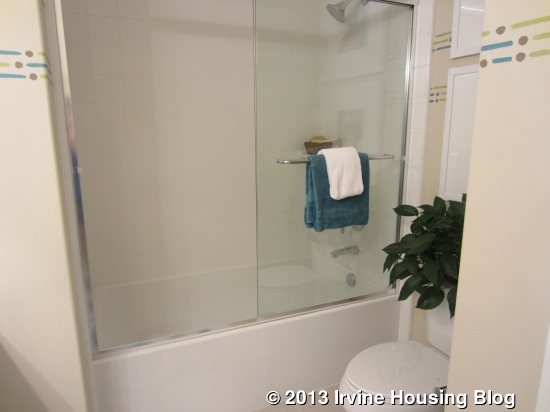 The model shows the upgraded laundry room with sink, though the standard comes with a linen closet instead. The machines are still stacked and there are cabinets over the sink. 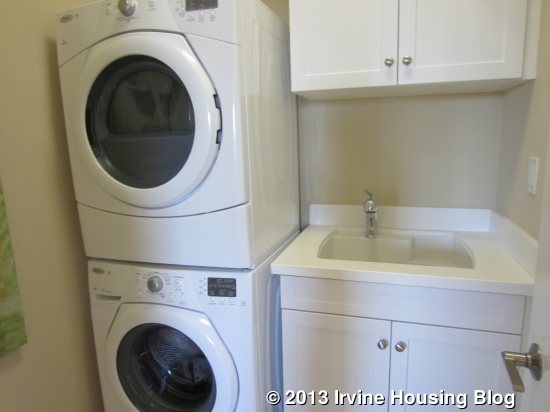 The master bedroom is also basically the same, with big windows at the back and two small ones on the side. In this home, the closet is off the bedroom itself, rather than at the back of the bathroom. The model shows upgraded built-ins in the closet and crown molding in the bedroom. 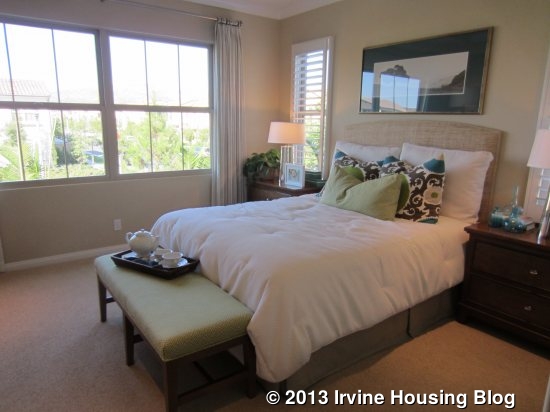 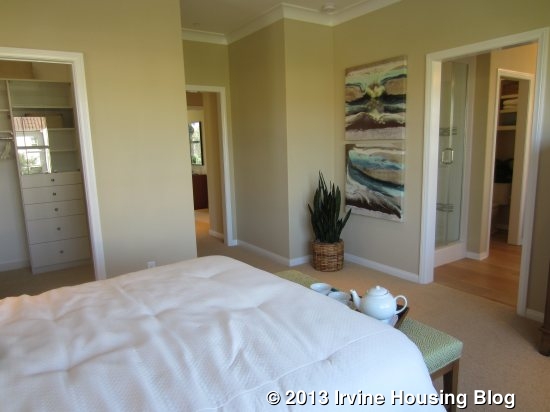 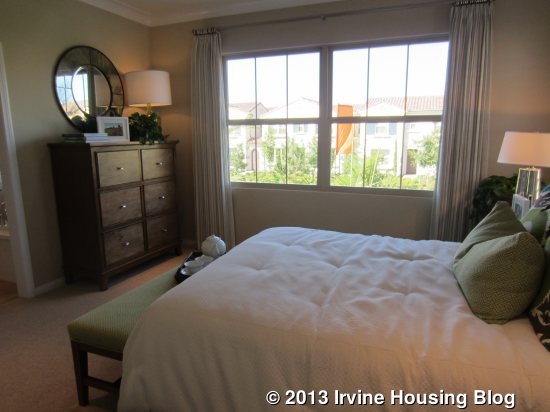 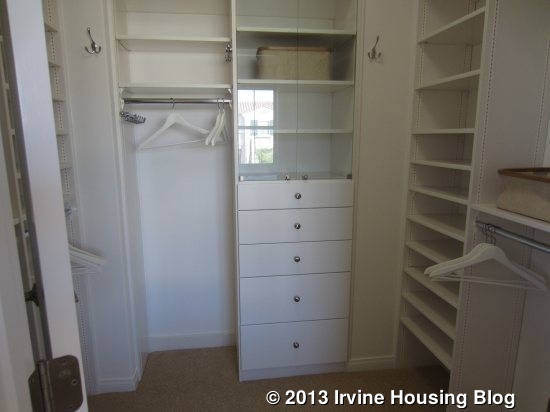 The master bath comes standard with a separate tub and shower. Unfortunately, this means the shower is a lot smaller than in the other two homes and there isn’t an option to change the layout. I think the shower is much too small. The sink and counter area is the same. 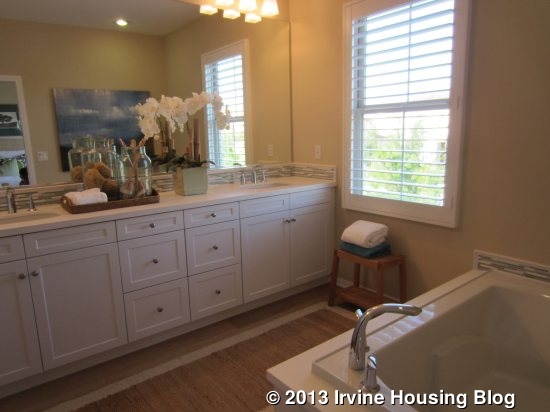 At almost 200 square feet bigger than Residence One, this house does feel a bit more spacious, but it doesn’t really feel that much bigger. The bigger entry, nicer powder room, and true pantry are nice changes from the other two models, though I wouldn’t like having the microwave inside the pantry. I also like that Residence Three is always an end unit.

Overall, these are basically three different versions of the same floor plan. If you like one, you’ll probably like them all. I like the general layout and it feels like a single family home on the inside even though it’s actually attached. The base prices are reasonable and many of the standard features are nice enough that upgrades aren’t necessary. The homes are most similar to Stonegate’s Santa Maria tract. Cambria has bigger patios, a garage at the front of the home, more square footage in each model, and, in my opinion, a better overall layout of the home. Santa Maria, on the other hand, has an optional downstairs bedroom in some models and is in a better location within Stonegate (closer to the school and community park, farther from any major streets).

Both Cambria and Santa Maria are now selling and have similar price points. Which neighborhood would you choose, and why?