Low interest rates are not created the demand for housing that low prices does.

Man I ain't getting nowhere

baby I just know that there is

You can't start a fire

you can't start a fire without a spark

This gun's for hire

even if we're just dancing in the dark

Bruce Springsteen — Dancing in the Dark

Not long ago I noted, Low Interest Rates Are Not Clearing the Market Inventory. Well, I am not the only one who has noticed. Richard Fisher, President of the Federal Reserve Bank of Dallas, has also noted that low interest rates will not fix the ailing economy, but super low rates will have many deleterious effects not anticipated by others at the Fed.

The environment of exceedingly low interest rates is great for banks, according to Richard Fisher, President of the Federal Reserve Bank of Dallas, but is doing little to help the overall economy get back on track.

"Despite their theoretical promise, reductions in interest rates to Lilliputian levels have not done much thus far to spark loan demand," he told the Association for Financial Professionals in San Antonio Monday.

Home loan demand is well off historic highs as Existing-Home Sales Sink to Lowest Level Ever Recorded and refinance demand has dropped because everyone either already has refinanced or they are unable to because they are under water on their mortgage. Plus, who is anxious to use low interest rates to buy assets at inflated prices? There is only one sure-fire way to stimulate demand: lower the price. Fix the Housing Market: Let Home Prices Fall.

On the weekend open thread, the clearest example of lower prices stimulating demand can be readily seen in Las Vegas:

Notice the crash in prices has resulted in a large boost in sales. Buyers in Las Vegas are currently more active than they were at the peak of the bubble.

So how is Southern California doing?

While home prices have bounced off the false bottom, the rate of sales has declined significantly from the peak and remains at very low levels? Why is that? Why are sales rates higher in Las Vegas than in Southern California relative to the peak?

Back to the article….

Liquidity seems to exist in other markets, notable commodities, he said. But it worries him that the money markets aren't coming back strong enough and short-term lending to small business remains restricted to a point of macroeconomic pain.

"It concerns me that liquidity is omnipresent on bank and corporate balance sheets, and yet it is not being used to hire American workers," he said.

Who are the banks going to loan that money to? The over-indebted American consumer? Few creditworthy borrowers exist in the current economic environment. Too much bank money is tied up in non-productive loans, non-productive assets, and low yield government treasuries.

The recent Fed cash pump, referred to as QE2, will also keep rates low and weaken the dollar, Fisher said. And the inflow may not stop at the current allotment to purchase $600 billion in Treasuries between now and the end of the second quarter of next year, which is on top of the amount projected to replace the paydown in mortgage backed-securities.

"I could not state with conviction that purchasing another several hundred billion dollars of Treasuries — on top of the amount we were already committed to buy in order to compensate for the run-off in our $1.25 trillion portfolio of mortgage-backed securities — would lead to job creation and final-demand-spurring behavior," he said. "But I could envision such action would lead to a declining dollar, encourage further speculation, provoke commodity hoarding, accelerate the transfer of wealth from the deliberate saver and the unfortunate, and possibly place at risk the stature and independence of the Fed."

Wow! A guy at the Fed who really gets it. Bernanke has openly stated he wants a weaker dollar too help stimulate inflation. The excess liquidity is bound to find its way into momentum plays as money chases the few asset classes with any real prospects and other money follows. This speculation leads to mis-allocations of resources and continued economic weakness. The theft from savers is obvious. Have you seen the interest rate on your savings account lately?

This activity should put the stature and independence of the Fed at risk. It is clear the Fed exists to promote moral hazard and prevent the normal cleansing function of recessions from occurring.

Despite the Feds best efforts, house prices in Las Vegas have crashed back to mid 90s levels, and because of it, the debt is being purged, citizens have affordable housing, sales rates are up, and the groundwork is being laid for a healthy recovery.

Because of the Feds best efforts, house prices in Orange County remain elevated at 2003-2005 prices, and because of it debt is being preserved, citizens have expensive housing, sales rates are down, and a sustained economic recovery is being delayed and weakened.

Las Vegas will prosper because once the crash has erased the excess debt, home owners will have more spending money as a percentage of their income than Orange County residents will have. This extra spending money will make its way to auto dealerships, local restaurants, and other businesses.

Borrowers in Orange County will be spending a much higher percentage of their incomes on interest and debt service, and only the hope of future mortgage equity withdrawal based on herd-induced appreciation keeps the whole system together. The local economy will suffer as local incomes are diverted to far-away interest recipients who are not stimulating the California economy. We can have high house prices or a vibrant economy, but we can't have both without Ponzi borrowing.

“This approach eased financial conditions in the past and, so far, looks to be effective again. … Easier financial conditions will promote economic growth … lower mortgage rates will make housing more affordable and allow homeowners to refinance. Lower corporate bond rates will encourage investment. And higher stock prices will boost consumer wealth and help increase confidence, which can also spur spending.”

Whenever I read one of Bernanke's statements, I assume he says stupid things like that because he has to. It frightens me that he might actually believe it. I think Greenspan believed his own bullshit. 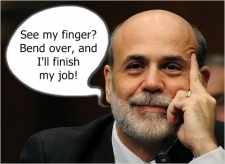 First, easier financial conditions — whatever that means — will not necessarily promote economic growth. Bernanke's zero interest rate policy hasn't fixed things so far. It has prevented asset prices from crashing to market-clearing levels, but I consider that a failure of policy; Benanke considers that a success.

Second, lower mortgage interest rates will not allow underwater loan owners to refinance, and even if they did, they still have too much debt relative to their incomes. Financing enormous sums at 4% isn't doing borrowers any favors as long as they have too much debt.

Third, lower bond rates may not encourage businesses to invest. What will they invest in? What is there a demand for that is not already over-supplied? Real estate? LOL!

Forth, higher stock prices — when inflated by air from the Federal Reserve — are Ponzi profits likely to evaporate once the Fed stops its inflationary policies. Is this a sustained element of demand upon which we should build our economy? 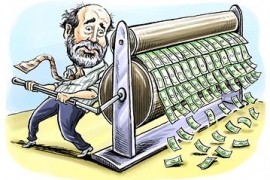 Fisher said he is already seeing foreign money go to other lands, funds that would normally be diverted into the American economy and that if more careful steps aren't taken, the nations can experience "super ordinary" levels of inflation.

The sad part of our policy is that we will export the inflation we tried to create at home. Japan's decades-long low interest rate policy helped inject excess liquidity into other Asian economies over the last 20 years, yet inflation in Japan remains elusive. It's hard to say where our excess liquidity will end up. China perhaps? Like water seeking its natural level, the liquidity will flow somewhere, and that isn't likely to be into the inflated real estate values in Southern California. With such low cap rates and only the prospect of Ponzi profits, why would rational money flow there? To pick up "investments" like today's featured property?

Most investors in Orange County who claim they are cashflow investing are still buying because they plan on obtaining and spending the price appreciation as income. it isn't true cashflow investing. Today's featured property is the type of property a cashflow investor should look for. It is near the university, so it is easy to rent, and it is relatively small, so there is not as much maintenance. The HOAs are ridiculously high, and so is the price relative to rents, but if you can extract equity to boost your returns, properties like this can be profitable. The problem is that appreciation is not stable and consistent, and it may or may not materialize. Contrary to popular belief, it will not materialize here to any degree over the next several years. As a true cashflow investment, this one is a loser.

According to the listing agent, this listing may be a pre-foreclosure or short sale.

Tomorrow night, Wednesday, November 10, 2010, at 6:30, there will be an IHB special event at Dave and Busters in the Irvine Spectrum. We will be gathering in the patio room to the left as you enter.

We have a long history of these events. Back in 2007, the first meetings were held when we still kept our identities secret. The biggest meeting was two years ago in November 2008, when I revealed my identity on the cover of the OC Register and held the big book-signing event for The Great Housing Bubble.

We have continued our meetings on and off over the last two years. During the summer, we held a number of meetings to raise money for the fund. I want to invite all the fund investors to come out on Wednesday evening. I can give you an update on my progress in person. Also, anyone else considering investing can come out and talk to me about getting in before the November 18 closing date.

One thing that was interesting about the investor meetings was how many long-term readers attended these events — readers I had never met. I would like to invite all the lurkers out there to attend as well.

Everyone is invited to a night of real estate talk, free appetizers and drinks, and a chance to meet with some reporters who find these IHB gatherings interesting. Please come out and show your support for the IHB.

32 thoughts on “Low Interest Rates Will Not Create Demand”