What you feel now

Cheryl Lynn — Got to Be Real

The U.S. homeownership rate, already down two percentage points from its 2006 peak of 69%, could fall by another five percentage points over the coming years to levels last seen in the mid-1990s, says a staff report from the Federal Reserve Bank of New York.

The study looks at the number of homeowners who are underwater, owing more than their homes are worth, and excludes them from the official homeownership rate calculated every quarter by the Census Bureau. 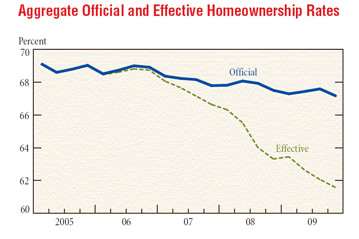 That homeownership gap is much bigger in cities that have seen big home-price declines. In Las Vegas, for example, the gap stands at more than 40 percentage points. So while Sin City’s official homeownership rate stood at 58.6% as of August 2009, the effective homeownership rate was closer to a paltry 14.7%. (That estimate uses the Case-Shiller home-price index to predict the number of underwater borrowers; estimates from the Federal Housing Finance Agency’s price index, which have less-severe price declines, produces an effective rate of 19.3%.) 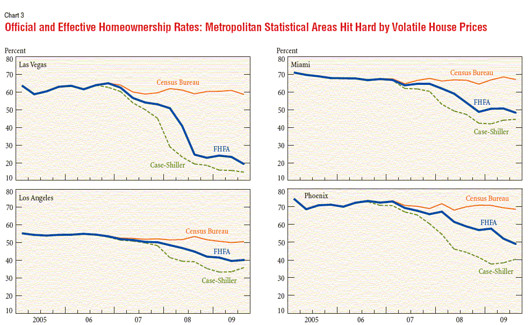 The effective rate of homeownership doesn’t imply that all underwater borrowers will lose their homes; instead, it suggests that they won’t act as traditional homeowners do. Government policy over the past two decades focused on growing the rate of homeownership for public policy reasons: Homeowners, the argument went, were more invested in maintaining not only their properties, but also their communities.

The effective homeownership rate serves as a “good guide to the future path of the official rate” because many underwater homeowners are simply renters-in-waiting, write authors Andrew Haughwout, Richard Peach and Joseph Tracy of the New York Fed. “Unless house prices increase substantially, many negative equity homeowners will in fact convert to renters in the years ahead, and the measured rate of homeownership will decline toward the effective rate.”

Some underwater borrowers, of course, will return to positive equity simply through the scheduled debt pay-down process. The study estimates that 36% of negative equity borrowers will recover their equity within three years, while 51% will be back “above water” within five years. That will speed up or slow down depending on what happens to home prices.

But homeowners will need to build up equity in order to move, which requires cash both for paying transaction costs associated with selling the old home and for a down payment for the new home. Absent any increase in home prices, it would take at least five years for 90% of borrowers who are underwater today return to a 94% loan-to-value. Moreover, the median mortgage in that group of borrowers would take 12 years to reach a 94% loan-to-value, without any home-price appreciation. 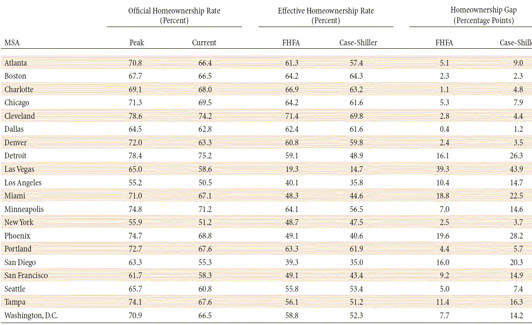 Peak buyers who lost it all

These owners lost $363,250 of their own money, and their credit is trashed.

Plan 3 Alexandria. This is the largest and finist model in Columbus Grove. Coupled with the Irvine School District. Every conceivable upgrate. Over $100k in landscaping. This is absolutely spectacular.